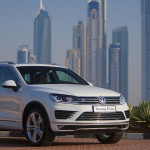 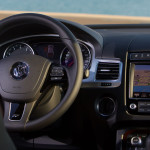 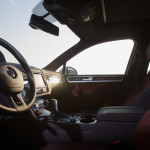 Dubai, 03 January 2015: Al Nabooda Automobiles, the sole distributor of Volkswagen in Dubai and the Northern Emirates today announced the much anticipated arrival of the new Touareg in its showrooms. Unveiled at the SUV world premiere in Beijing earlier this year, the new Touareg, has been redesigned to offer customers new front and rear designs, new technical features and a wide range of colours and interiors. The Touareg is one of the world‘s most successful premium-class SUVs. Within a decade, Volkswagen has sold around 720,000 units of the high-class sport utility vehicle; last year alone over 70,000 drivers chose a new Touareg, which combines the best of passenger car comforts and off-road worlds in one model. The 2015-generation can be identified by the new front and rear designs and by its new colours. In terms of technology, all V6 and V8 models now come equipped with an automatic post-collision braking system (helps prevent a secondary collision in case of an accident), bi-xenon headlights and a coasting function. Thierry Seys, General Manager, Al Nabooda Automobiles, Volkswagen, said: “The new Touareg boasts the comfortable dimensions of a luxury sedan and the dynamic attributes of a sports car. The spacious SUV’s latest model offers our valued customers an economical drive experience, whether on or off-road. “The Touareg is one of the most successful upper class SUV’s in the world and we anticipate its popularity with our customers across Dubai and the Northern Emirates will continue with the arrival of the new model to our showrooms.”

Exterior design and features Front end. The front-end design of the Touareg was completely re-developed. Especially distinctive are the headlights which are now larger; moreover, bi-xenon headlights as standard and the newly designed LED daytime running lights, available from the SEL package onwards. The trapezoid-shaped lights create a line towards the re-designed radiator grille in the middle of the vehicle. In contrast to the previous model, the grille is trimmed with four transverse chrome fins instead of two; the two lower fins are visually extended into the headlights. Together, the radiator grille and headlights form a prominent wide band. Designed as a parallel line beneath it is the new bumper, which is now styled for a more horizontal effect. The new design gives the Touareg an even wider and more impressive appearance. Complementing this visual image is the lower area of the bumper, which boasts a completely new look. As on the new Scirocco R sports car from Volkswagen, the lower air inlet now forms a stylised “A“ instead of a “V“ that transitions into the side air inlets to the right and left; giving the new Touareg a fuller stance on the road. When the “Chrome & Style“ package is ordered with the SEL, there is a chrome strip on the next level, which continues into the side and rear body sections. Beneath this strip are newly designed fog lights that are coordinated with the new bumper design. At the bottom level, there is a new front spoiler, which perfects the aerodynamics of the underbody and the front wheels Rear section. From the rear, the more precise styling of the Touareg is marked by its new, cleanly designed bumper which, similar to the front end, emphasizes the width of the SUV. When the “Chrome & Style” package is ordered as an option on the V6 package, a wrap-around chrome strip is integrated in the bumper. Integrated between the exhaust tailpipes is a redesigned diffuser. Designers have relocated the LED rear fog lights to the bumper, which, as in the previous model, also integrates the rear reflectors. Visual highlights in the area of the boot lid include the re-designed VW badge and a sharpened tornado line between the rear lights. Colours. Thelatest Touareg is available in a total of twelve body colours; five of which are new to the model package: “Light Silver Metallic“, “Sweet Date Gold“, “Moonlight Blue Metallic“, “Black Oak Brown Metallic“ and “Reef Blue Metallic“.

Interior design and features Upholstery materials and accents. The new Touareg also offers an extended line-up of upholstery materials and wood accents – the “Vienna leather“: a fourth colour, “Bonanza Brown“ (dark brown), is now offered in addition to the colours “Titan black“, “Corn Silk Beige“ and “Natural Brown“. In addition to these four colours, there is the elegant “Nappa leather“ which can now be ordered in the new colour “St. Tropez“ (light sand hue) and “Bonanca Brown” . Also new are the two fine wood accents “Sapelli Mahagoni“,”Wallnut” and “Engineered Ebony“.

Controls. The interior of the Touareg reflects an extraordinary alliance of rugged SUV elements and sophisticated premium-class elements including aluminium rotary knobs for the Climatronic system, running gear adjustment, air suspension, radio-navigation system, mirror adjustment and the air vent knobs which have been replaced by a new style of rotary knob – perfected both to look and to touch. In addition to the chrome accents around the control panel modules and the running gear adjustment controls, the red illumination of all controls is now white. Above the infotainment system, the central push button/display bar on the centre console is now extended. Previously the console consisted of three elements: “Park Distance Control“ (PDC), hazard warning unit and status display “Passenger airbag off“. In the new generation Touareg, the new push button for windscreen heating has been integrated to the right of the passenger airbag indicator, meaning the three button module now boasts five buttons. Another upgrade as standard includes a manual lumbar support adjustment in the front seat area.

Multiple-collision avoidance braking system After a collision is detected, the brakes are automatically held in order to keep the car from rolling further unintended 12-pin trailer socket The trailer socket boast an additional two extra connections via pins 10 & 11 enabling the new Touareg to supply the trailer with higher currents while the engine is running (approx. 15-20 A) for example when charging of trailer battery or for air cooler.

Fuel consumption reduced by up to six per cent. Thanks to extensive aerodynamic improvements (such as air inlet openings in the front of the vehicle, modified door mirror caps and new wheel spoiler), tyres optimisation for low rolling resistance and standard 8-speed automatic gearbox optimised for low friction, Volkswagen was able to improve the fuel efficiency of the Touareg by up to six per cent. In everyday driving, fuel consumption is also reduced by an optimised stop-start system, a standard coasting function for the V6 versions (until now only available with the Touareg Hybrid) which means as soon as the driver releases the accelerator pedal, the engine is decoupled from the gearbox; this is also known as “coasting“– a function even possible at vehicle speeds up to 130 km/h.

Technical perfection. The standard steel-spring running gear has also been optimized in the new Touareg; improvements include more agile steering response and a gain in comfort. An air suspension is available as an option. Changes in the spring/damping unit have also resulted in optimized driveability of standard suspension. The new Touareg will initially be available in the Middle East with both V6 and V8 FSI, a direct-injection petrol engines. To find out more about the Volkswagen Touareg or to enquire about the upgrade, visit the Al Nabooda Automobiles Volkswagen showrooms in Dubai, Sharjah and Fujairah today.

Photo Caption:          The new Touareg, available now at all Al Nabooda Automobiles showrooms in Dubai and the Northern Emirates.