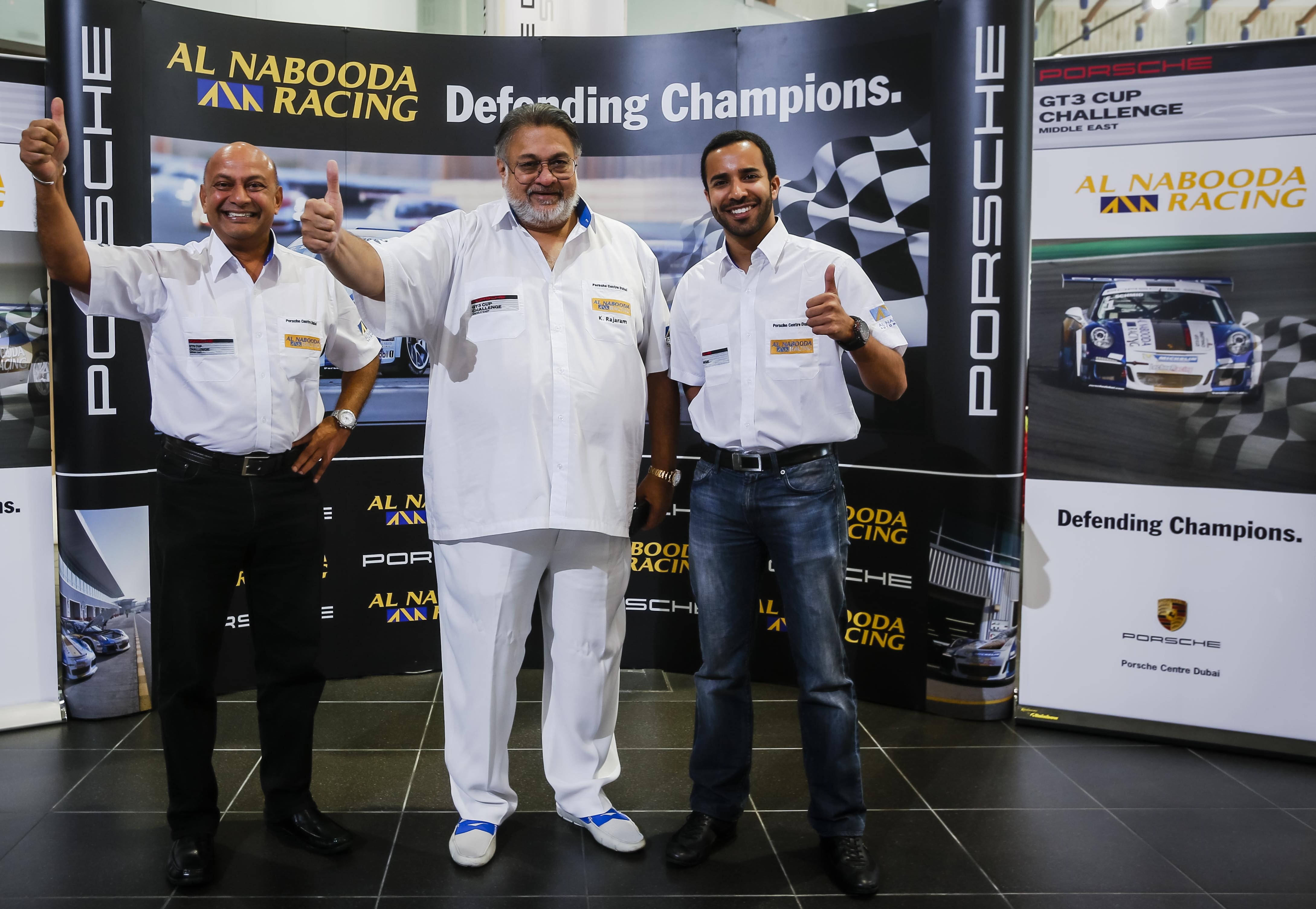 Al Nabooda Racing have paired Clemens Schmid with Oman’s Ahmad Al Harthy, one of the region’s most experienced circuit racing drivers, in an exciting new line-up for the 2014-15 season as they look to complete a hat-trick of team titles in the Porsche GT3 Cup Challenge Middle East. Porsche Centre Dubai, Al Nabooda Automobiles LLC, Porsche Importer Dubai & Northern Emirates, announced the Schmid-Al Harthy combination at an official team press conference today. Al Nabooda Racing secured a second successive team title in the Porsche GT3 Cup series last season, finishing with a 65-point margin over the runners up, Saudi Falcons. They won the team prize outright in seven of 12 rounds, sharing top place on another occasion and finishing runners up twice. Al Harthy, who replaces Karim Al Azhari in the Al Nabooda Racing team, will be returning to the Porsche GT3 Cup series in which he finished sixth overall in the 2011-12 season despite making only a limited number of appearances. He scored his maiden race win in the series that season at Abu Dhabi’s Yas Marina Circuit. “We’re very pleased to welcome Ahmad to the team and to pair him with Clemens for the first time,” said Mr. K. Rajaram, CEO, Al Nabooda Automobiles. “We believe this is a combination which can help us secure the team championship for a third year. “I’d like to place on record our sincere thanks to Karim Al Azhari, who has given Al Nabooda Racing great service since 2005, and played an important part in establishing the team as the No.1 in the Porsche GT3 Cup Challenge Middle East over the last two seasons. “We now look forward to the new season with great optimism. We take great pride in the opportunity we have, as the largest single Porsche dealership in the world, to continue promoting the brand’s strong link with motor racing, and its long and successful record in the sport.” Schmid and Al Harthy will take the wheel of identical brand new 2015 Porsche GT3 Cup Cars when the 12-round, one-make series enters its sixth season, with the first two rounds taking place at Bahrain International Circuit on 14-15 November. Vijay Rao, Team Manager and General Manager, Al Nabooda Automobiles LLC, Porsche Importer Dubai & Northern Emirates, said: “Our success over the last two seasons has made us eager for more, but it has also made us the team to beat so it will be even more challenging this time to win the championship. “We’ll need to work harder than ever to keep hold of our No.1 spot, but we have a combination of drivers who are up for the task, and are confident that Ahmad will form a successful partnership with Clemens.” Schmid was unable to attend today’s press conference after his car was hit from behind in Sunday’s final round of the Porsche Carrera Cup Germany at Hockenheim. But he expects to race in next week’s final round of the Porsche Mobil 1 Supercup in the US and will start the new GT3 Cup season with Al Nabooda Racing in Bahrain. Detained in hospital in Germany for a second round of X-Rays, he said last night: “The doctors don’t think anything is broken, but they want to make absolutely sure. I should be out of here before the end of the week and ready to race in America, and I’m looking forward to teaming up with Ahmad for the first time in Bahrain. “It will be tougher than ever this season, but I’m sure that we’ll work well together, and that we can bring another team title back to Dubai for Al Nabooda Racing.” Schmid won seven of 12 rounds in the 2012-13 campaign as Al Nabooda Racing secured the double of team and individual drivers’ titles. His seven race wins last season put the Dubai outfit in control of the team championship again, while he was edged into second place in the drivers’ standings by a single point. Al Harthy made his racing debut in 2006 when he entered the Thunder Arabia Middle East series, becoming the first Omani driver to compete in single-seaters and finishing the season as vice-champion. He established himself on UK race circuits by contesting the Porsche Carrera Cup GB Championship in 2010, 2011 and 2012, finishing fourth, third and finally champion in the Pro-Am 1 class before moving into endurance racing last season. Al Harthy said: “I’m very happy to join Al Nabooda Racing and to have the chance to drive for the top team in the Porsche GT3 Cup series. I’ve raced against Clemens so I know how good a driver he is and I’m sure that we can form a winning partnership. “Like all racing drivers, we both want to win races, but the priority is to support each other and put the team first, as the main goal is to secure the team title for a third year in a row.”

Extended Care for your Volkswagen.