UAE based Al Nabooda Automobiles has been appointed as its UAE distributor by Indian petroleum giant, Hindustan Petroleum Corporation Limited (HPCL) through its 100 per cent subsidiary in the UAE, HPCL Middle East.

Part of the diversified conglomerate Khalifa Juma Al Nabooda Group, Al Nabooda Automobiles has more than 4 decades of experience in the automotive sector and is the exclusive dealer for the Audi, Porsche and VW brands in Dubai and the Northern Emirates of UAE. 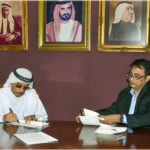 Incorporated in 2018, HPCL Middle East FZCO is the UAE arm of the Indian Petroleum giant which is a market leader in the highly competitive Indian lubricant market. HPCL is a Global Fortune 500 Company grossing more than US$ 35 billion in sales revenues and apart from its major fuel refineries, owns and operates the largest Lube Refinery in India. In the humungous Indian Lubricants market , HPCL has consolidated its position as the largest lubricant marketer and with a robust R&D support and state of the art blending plants, manufactures and markets more than 450 grades of lubricants, specialties and greases finding applications in all sectors including automotive, transport, industrial, mining, construction, agriculture, defense and marine .

By partnering with HPCL, we are diversifying into a new but related business sector. As a major player in the premium automobile retail sector, Al Nabooda Automobiles enjoys high brand equity in UAE market. The lubricants sector is highly competitive with established players and there are four key strengths that we will capitalize on in order to make this venture into a success, namely our strong existing relationships, the world class infrastructure that we have built across UAE, our orientation towards customer satisfaction and most importantly our talented manpower resources”.

Hailing the partnership Mr. Subhendu Mohanty, CEO, HPCL Middle East FZCO, said “This is a perfect amalgamation of strengths, given the expertise of Al Nabooda Automobiles in building hugely successful world class brands in UAE and the  market leading  and customer centric products and services offered by  a seasoned marketer as HPCL.”

Wishing the partnership all success, Executive Director-Lubes, HPCL India, & Chairman, HPCL Middle East FZCO, Mr. R. Sudheendranath expressed “It is indeed a privilege to partner with the admired and renowned Al Nabooda Group of companies and to work together with them to bring the high quality offerings of HP Lubricants and related petroleum products from HPCL to service the requirements of a vibrant UAE market”.

Al Nabooda Automobiles will tap into its decades of experience in the UAE to market and sell the HPCL range of lubricants and oils in the Automotive and Marine sectors in the short term and gradually scale up operations to include other segments of HPCL lubricants in the medium to long term.